Switching from metal wheels to pneumatic tires in the 1930s was an easy change for farmers. After all, the advantages were obvious—more traction, less compaction, and less fuel burned. Although the change in appearance isn't nearly as obvious as it was back then, we are in another tire revolution delivering upon the same promises. A new generation of farm tires is here.

From Metal to Pneumatic to New Age

In 1935, about 85% of tractors rode on metal wheels. With a punishing ride and lots of slippage, metal-lugged tractor wheels were far from ideal. It’s not that companies hadn’t tried rubber tires on tractors: As early as 1845, R.W. Thomson of Edinburgh, Scotland, tried to outfit his Road Steamer with pneumatic tires. While the wheels went around and around, they didn’t pan out in the real world. The experiment ended so badly that Thomson decided to work on perfecting the fountain pen instead.

As time wore on, there were more bumps in the road for pneumatic ag tires. In 1918 International Harvester became the first manufacturer to outfit a production tractor with rubber tires—solid rubbers on the front wheels and solid rubber blocks molded to detachable metal lugs on the rear wheels.

By 1934, the pneumatic era was finally beginning to dawn in the ag tire market. In May the Nebraska Tractor Test Site conducted test number 223—the first official test of a pneumatic-tire tractor. The Allis Chalmers WC, the first tractor to come standard from the factory with rubber tires, achieved 8.18 horsepower hours of work per gallon of fuel with rubber tires compared to 5.62 horsepower hours with metal lug wheels. They confirmed what early inventors of pneumatic tires had hoped: better traction equals better fuel economy and power . . . and more work completed for the same effort.

Today, tire companies are still chasing this same goal—to provide growers with tires that help them get more work done in a day with more traction, less compaction, and less fuel burned. What began as crude experiments has become a sprawling industry, with more companies than ever focused on creating tires to help improve your bottom line.

Beginning with the 1934 tractor test, it was off to the races (or, should we say, off to the fields) for rubber tractor tires. In 1934, only 14 percent of tractors wore pneumatic tires. By 1940 that number had skyrocketed to 95 percent. Why did so many farmers choose pneumatic over metal so quickly? As the use (and size) of machinery grew, and tractors replaced horses, farmers began to farm more land. As farmers had to travel farther to reach their fields, it became important for wheels to perform in the field and on the road. America’s network of (tarred) rural roads began a rapid expansion in the 1920s. County and state highway authorities began to frown on the damage done to tar by metal-lugged wheels.

Early tractors tires fell into the bias ply category. These sturdy, durable tires were (and still are) built with multiple rubber plies overlapping each other. The plies, which run sidewall to sidewall, form a thick layer of protection against rocks, stubble, and other hazards. While offering good in-field stability on hillsides, these tires can be sensitive to overheating, as the sidewall and tread function as one unit.

Their crowned profile makes them an excellent choice for skid steers, ZTR mowers, and chore tractors: they won’t tear up muddy cattle yards and lawns as radial tires, with their flatter tread profiles. And with a lower price tag than a comparable radial, bias ply tires are often the better choice for workhorse chore tractors that spend hours chopping corn stalks, haying, and doing other jobs that need to be done on the farm.

Invented in 1946, radial tires have gained market share as the size of farm machinery has increased. In fact, they have become the preferred choice for maximizing traction and carrying heavy loads in the field. Two-part construction is what sets radials apart from bias tires. The cord plies are arranged at 90 degrees to the direction of travel, and the under-tread area is wrapped around the circumference of the tire by radial belts of steel or fabric.

Unlike a bias ply tire, the sidewall and tread function independently with a radial. This allows for more even wear: the tread on a radial can last 2 to three times longer than a bias tire’s tread. A radial tire’s construction also allows for a larger, more uniform tire footprint in the field, which equals more traction and less compaction and wheel slippage.

Basically, you’re getting more pull out of each engine revolution when your tractor is wearing radial tires. At the same time, the larger and more uniform footprint helps prevent yield-robbing soil damage from compaction.

Designed to Handle the Mud and More Miles on the Road

Today’s high-tech ag tires are built on long-standing radial technology. With increased competition in the ag tire marketplace, you—and your farm—will benefit the most from the latest high-technology tires. What is the driving force behind this innovation?

With more land worked by fewer growers, larger machines are a fact of life. Their size, coupled with the need to travel more miles to reach far-away fields, means that today’s tires have to perform both on and off the road.

Rolling Into the Future: IF/VF Tires

IF and VF tires achieve these gains using highly technical sidewalls that incorporate a complex network of steel belts to help carry the load and promote a uniform, rectangular, and larger footprint. Rather than depending on air pressure alone to carry the load, these tires use both the sidewalls and air pressure to distribute your machine’s weight more evenly and over a larger area. Manufacturers design these tires to have a longer footprint (instead of a wider footprint) than a standard radial. Traction improves because a longer footprint puts more tread bars on the ground, which gives you more pull for each engine revolution.

What does this mean for you, on the ground, in your fields?

IF and VF Tires deliver better fuel economy and longer wear, thanks to a decrease in slippage and an increase in traction. Plus, stouter sidewalls offer stronger protection against corn stalk damage.

These tires are worth their long-winded name, especially for grain carts and combines. They’re designed to be “temporarily overloaded” in situations where a machine’s weight varies from minute to minute during normal operation.

As an example, the Alliance 372 Agriflex is capable of carrying 55 percent more load (below 10 miles per hour) and 30% more load than a standard radial at 11 to 20 miles per hour. To gain the maximum benefit from modern farm tires, you have to follow the manufacturer’s speed and load restrictions carefully.

The Next 10 Years: Everything But Square

We’ve seen glimpses of next-generation ag tires, and, as with any new product, they may look a bit out of place at first glance. Sidewalls that bulge in instead of out? A tire and wheel as one unit? These have been in the works for some time and we think these designs will eventually make their way into general use.

While these tires may look futuristic, the designers’ goal is the same as it has been for the current generation of high-performance ag tires: to fight compaction while delivering more traction and better roading.

For example, look at the Galileo Cup Wheel or the Mitas PneuTrac and you’ll notice their unique sidewalls immediately. The goal of these designs is to combine the benefits of a tire and a track. You get the massive footprint of a track—a footprint that stays consistent even at different air pressures—with the ride and handling benefits of a round tire. These tires flex effortlessly over obstacles, provide confident handling on hillsides, and are even able to run flat for a short time.

The Council for Ag Research and Economics (CREA), based in Italy, tested the Mitas PneuTrac and found that it had a 53 percent larger footprint than a comparable radial. The testers also found an increase in traction between 12 and 24 percent versus a standard radial tire. They may look odd, but these new designs hold some serious promise should their performance continue to impress during real-world use.

While some next-gen tires may combine the features of a track and a tire, two new products on the market take the 2-in-1 concept a different direction (or two).

Tweels—as the name suggests—combine a tire and wheel into one unit. For a skid steer, UTV, or mower this can mean more secure handling without the bouncing associated with a pneumatic tire. Common hazards don’t affect Tweels and they can even be retreaded. Advanced tread compounds mean that a Tweel can outlast a regular pneumatic tire with the same tread depth.

‍Michelin’s EvoBib is yet another tire design engineered for today’s larger and more expansive farms. The EvoBib works in conjunction with a central tire inflation system (CTIS) and offers two distinct tire footprints depending on the air pressure. For road travel, the high inflation level results in a narrower profile for less rolling resistance on the road. Gaps in the tire’s tread bars allow sidewalls to collapse and increase the tire’s footprint width for field operations at low inflation pressure.

Which futuristic tire will dominate the market in ten years? No one knows for sure. But if the history of ag tires has taught us anything, the winner will be the tire that helps growers do more work with less effort. The tire that will fight compaction, deliver a comfortable ride on the road, and support the weight of ever-growing machines.

An Explosion of Tire Options

The last few years have ushered in an enormous number of tire options. Finding the best tire for a tractor or combine can be an overwhelming task for a farmer. NTS Tire Supply helps our customers identify the best tire options for their operation. We provide choices from every major tire brand, which means we can deliver any tire you need. Drop us a line on our contact page or call us at (888) 787-3559. Our team is here to help.

END_OF_DOCUMENT_TOKEN_TO_BE_REPLACED 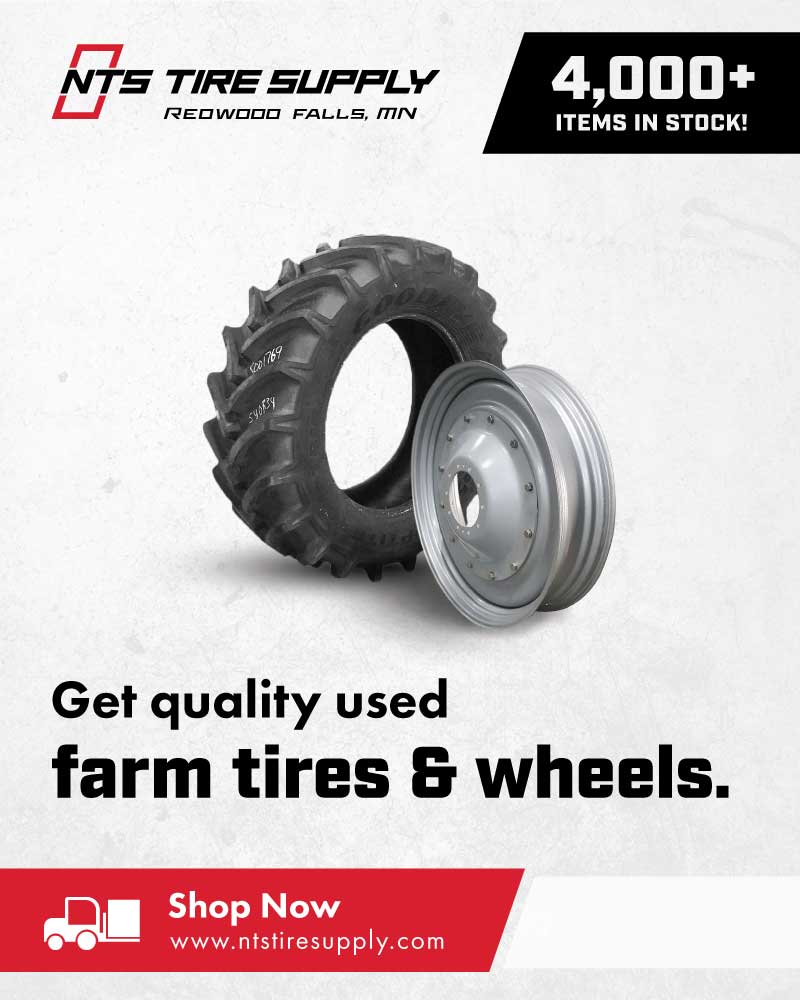 5 Technologies Taking the Pressure Off Your Planter's Pinch Rows

Transform Your Tractor with a Central Tire Inflation System

Rubber vs. Poly Midrollers: Keep Field Work on Track with the Right Midrollers