Whether racing with a loaded grain cart to a waiting line of semi-trucks or lugging your largest ripper across the field, John Deere’s 9RT (or older 9000T) model line is the go-to workhorse for many farmers. Because the window of time to complete harvest, tillage, or spring field work is never very long, it’s important to maximize the uptime of your 9RT.

To keep your 9RT and field work running smoothly, it’s important to periodically review the health of your big Deere’s tracks. Whether it’s time to replace worn-out tracks or upgrade to a track model that better suits your farm’s soil conditions and pulling needs, keep reading for a list of available 9RT (and older 9000T series) replacement tracks. We’ve highlighted our favorite models below based on NTS Tire Supply’s customer feedback and our experience.

Camso, the OEM track supplier for the 9RT (and customer favorite) offers several track models for the John Deere 9000T and 9RT series in both 30- and 36-inch widths:

The 3500 General Ag strikes a balance between reliability, quality, and price for those who work their tractors between 500 and 1,000 hours each year. Guide lugs are reinforced for improved side-load resistance when compared to the entry-level 2500. If you run a 9000T, this is a good choice if you’re performing general tillage, carting, and other chores that don’t quite measure up to “severe duty.”

Our favorite, the 4500 General Ag, balances a competitive price with reliability and performance that suits the needs of most farmers running the 9030T or 9RT. Equipped with Camso’s TrackShield™ carcass technology, the 4500 is 20% more resistant to punctures than its little brother, the 2500. Its tread bar balances traction, flotation, and cleanout for all-around performance in a wide variety of field conditions. This isn’t a specialist track: it’s designed to suit the needs of most growers under less-than-extreme weights and job duties. Camso does offer a sideslope version of the 4500, with beefier guide lugs for better tracking on hilly terrain, in the 30-inch width. Camso recommends the 4500 for placement on tractors that perform tillage and row-crow applications for 500–1,000 hours per year.

The 5500 General Ag is the severe-duty Camso option for those running a 9000T. Its taller, wider tread bar is designed to provide long-lasting performance under the most demanding field conditions.

Camso adds even thicker (6.7 mm vs. 5.4 mm) cables to its 6500 General ag package to create the 6500 Scraper—the company’s heaviest-duty track. A blend of 6 different rubber compounds help the tread bars and track carcass resist chunking, cuts, and other damage under severe conditions. The lower, wider tread bars provide enormous grip on firm soils, such as those found on road construction sites.

In our experience at NTS Tire Supply, we’ve found Camso tracks to have excellent tread wear properties. What does this mean for you? A longer-lasting track. Camso is known in the industry for its vulcanized (glued on) lugs. While some manufacturers claim that this can cause the lugs to completely separate from the track’s body, we can tell you that, in our experience, this simply isn’t true, except in extremely rare circumstances.

We feel that Camso’s vulcanizing process actually adds to the tracks’ durability. Focusing on the carcass as a separate manufacturing step allows Camso to ensure that the cables are spaced and aligned perfectly in the carcass. This allows the tracks to align better and run true for a longer-lasting track. True to the company’s promise, we’ve found that Camso tracks do deliver uniform tread wear, which could translate into “an extra season of work” before you have to replace them.

Do you want a track with Camso specs but need to save money? Then look no further than Yieldmaster tracks. Manufactured by Camso, the Yieldmaster is nearly identical to the Camso 4500 General Ag save for the lug design and shorter guide lugs. It features “hauler step design” tread bars, which are designed to promote a smooth ride with good wear, cleanout, and traction properties. If your tractor works between 500 and 1,000 hours per season on general tillage, the Yieldmaster may be a good fit for your operation. Their warranty is the same as Camso too: coverage for 4 years or 2,000 hours.

Firestone tracks are constructed with one-piece vulcanization, a 4-ply main cable, and the company’s PRO-EDGE design, all of which promote reliability and protection against field obstacles. According to Firestone, the chamfered (grooved) tread bars are designed to cut down on soil disturbance, and their 6-inch pitch promotes a smooth ride down the road. Based on customer feedback, this appears to be true in the real world: customers generally comment that the Class 5 has a better ride quality than the Class 6. In fact, the Class 5 sports either 126 or 130 tread bars compared to the Class 6’s 96 or 98. Closer-spaced tread bars will generally give you a smoother ride. However, the tight lug spacing can affect performance during heavy-pulling applications. For carting or planting, however, the Class 5 is perfectly adequate.

The Class 6 packs the same design and construction techniques as the Class 5 into a more aggressive package. Compared to the Class 5’s tread, the Class 6 is taller and has a wider pitch. This results in greater traction and better clean-out in wet conditions. We consider this a fairly aggressive tread, which is best suited to heavy tillage applications. The downside to the increase in traction is a rougher ride down the road, thanks to the taller and more widely spaced lugs. Keep this in mind if you have to travel a lot of miles between your fields as you’ll have a tradeoff in comfort for the added traction in the dirt.

Introduced in 2010, the Continental Trackman® HP was the first friction-drive track fitted to John Deere tractors. Defense contractor Loc Performance acquired the Continental track facility and product line in December 2021. Loc Performance was founded in 1971 to produce auto parts. The company has been a defense contractor since 1985 and began producing tracks for the military in 2014. We haven't recommended these replacement tracks due to customers experiencing some significant issues with them. Casing separation, which causes the cords to become exposed, seems to be a common problem. However, if you’ve had good luck with Continental tracks in the past and want to outfit your 9000T – 9RT series tractor with another set, there is one option available in the 30- or 36-inch width. Time will tell if Loc Performance is able to improve the performance of these tracks.

At the heart of these tracks are galvanized wire cables, which resist corrosion and premature failure. The company also packs 50% more wires (12 wires per inch versus 8) into its track casings than the competition. The Trackman® HP Extreme—the company’s top track—includes MAXXTUFF™ steel belt reinforcement, which it bills as the strongest on the market. Compared to the basic HP tread, the Extreme’s center is wider, which allows for better cleanout in demanding (wet) field conditions. Taller tread rubber adds traction and tread life as well.

There’s a lot riding on your 9RT’s tracks. Not only do they support the weight of this massive machine, they keep your operation moving forward when time is tight and you can least afford a breakdown. If the past few seasons have been hard on your 9RT’s tracks, call or drop a line to talk with an expert at NTS Tire Supply today.

Now is the time to outfit your big Deere with a set of replacement tracks ideal for your unique needs. No two operations are the same, so we’ll use our experience and expertise to find a pair of tracks that fit your budget and performance needs.

END_OF_DOCUMENT_TOKEN_TO_BE_REPLACED 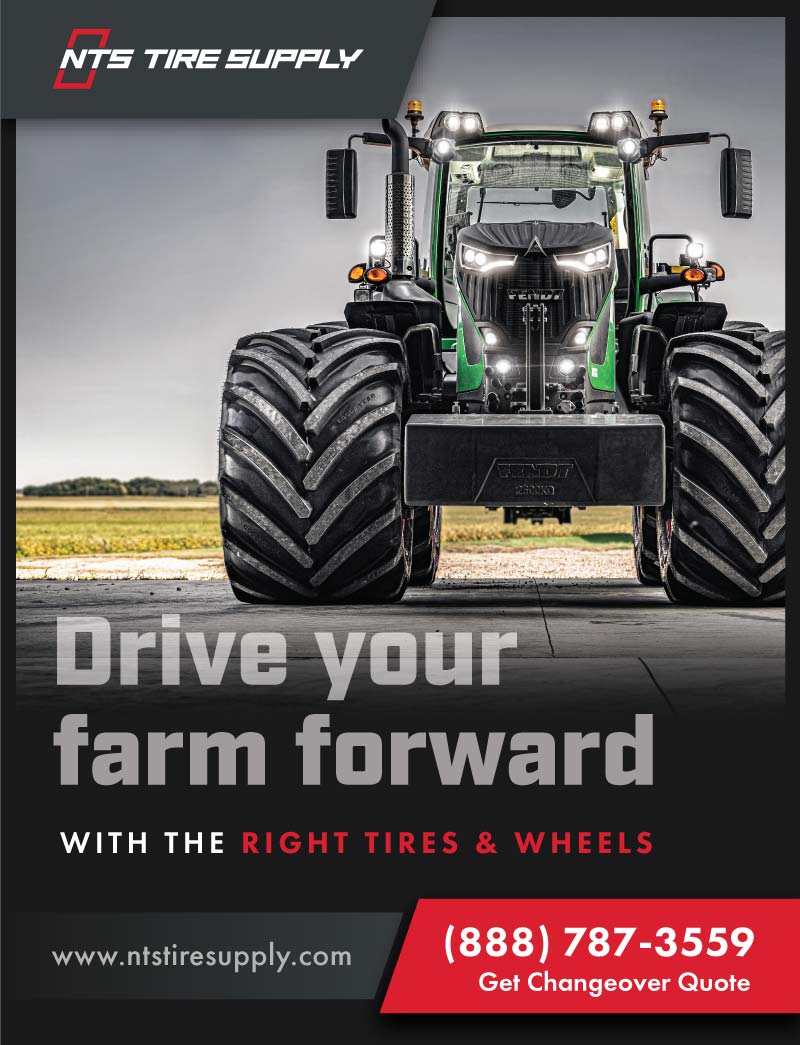 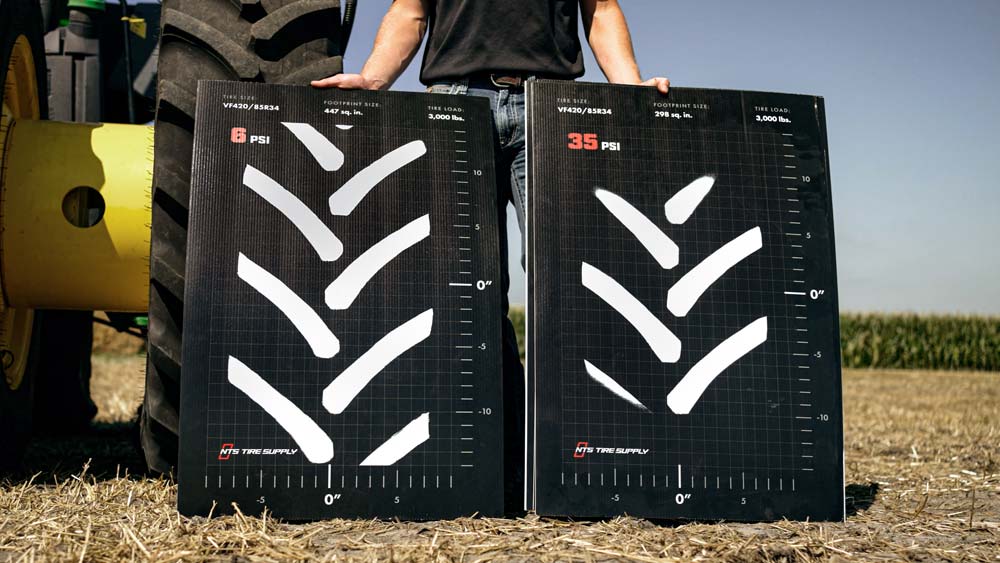 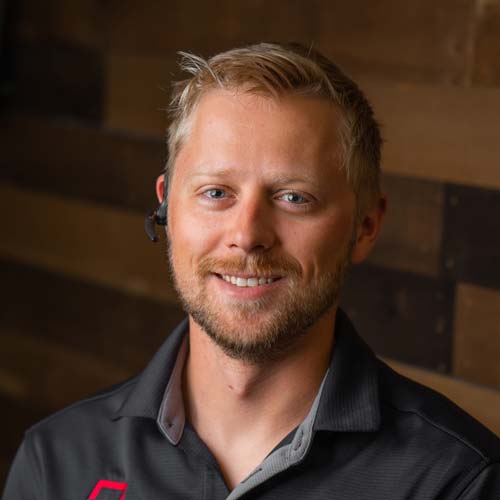 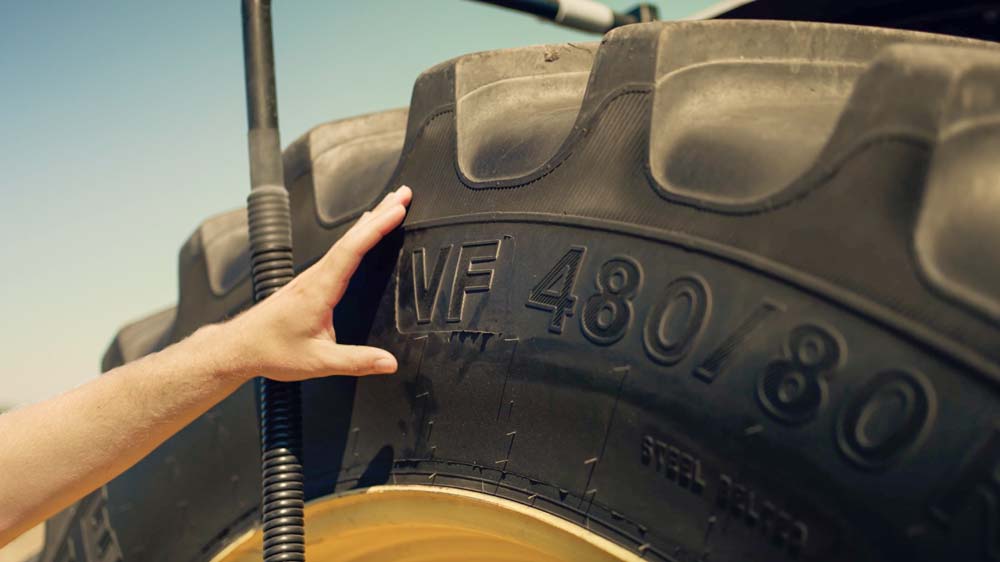 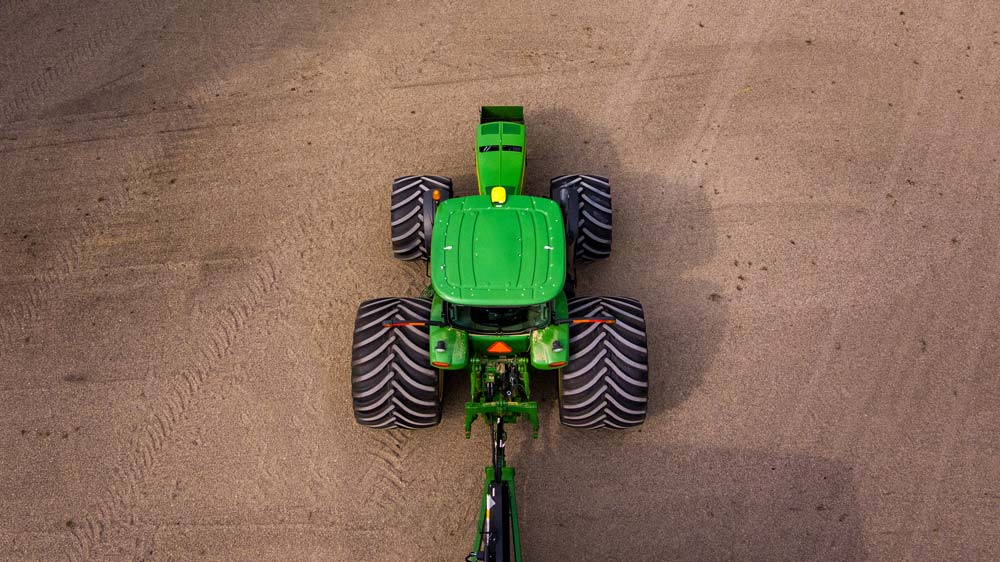 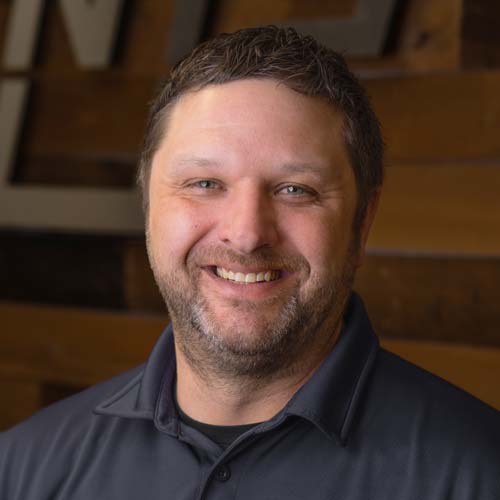 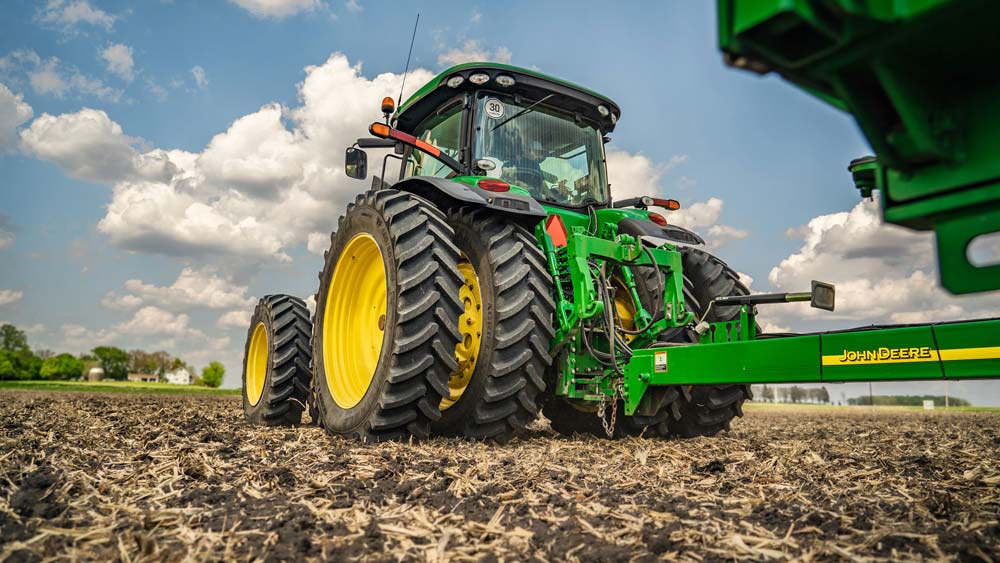 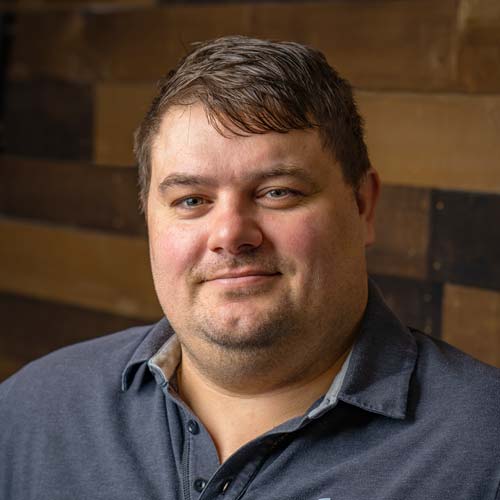 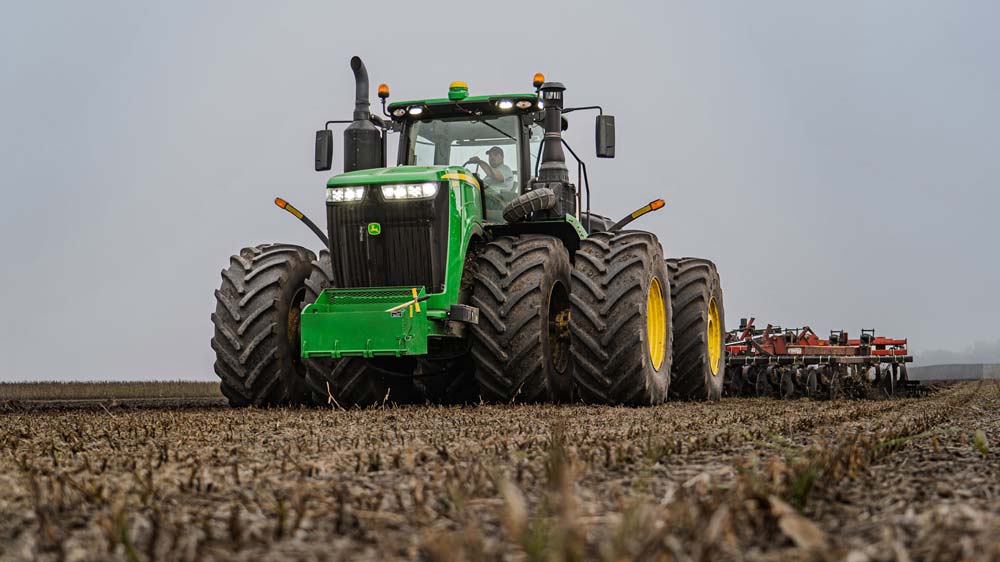